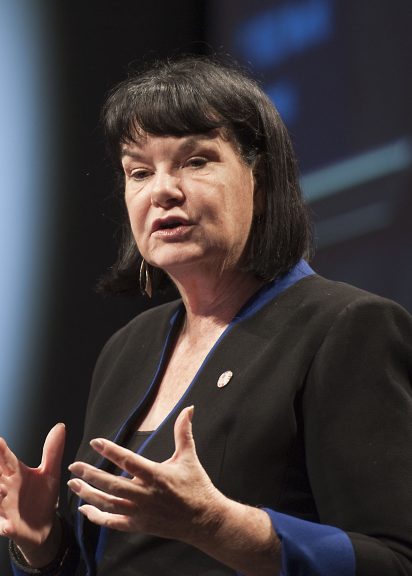 Sharan Burrow is a lifelong advocate for workers and labour rights. She is General Secretary of the International Trade Union Confederation (ITUC), which represents 207 million workers in 163 countries and territories from 331 national affiliates. Previously President of the Australian Council of Trade Unions (ACTU) from 2000 – 2010, she served as inaugural President of the ITUC from its foundation in Vienna in 2006. Sharan has led union negotiations on major economic reforms and in labour rights campaigns. She also serves as a Commissioner of the Global Commission on the Economy and Climate.

Burrow began her career in education in Australia and taught in rural high schools. From there, she became an organiser for the NSW Teachers’ Federation, was elected Senior Vice-President of the NSW Teachers’ Federation and was President of the Australian Education Union (AEU) from 1992 -2000. Burrow has also served as a member of the Governing Body of the International Labour Organisation and a member of the Stakeholder Council of the Global Reporting Initiative.